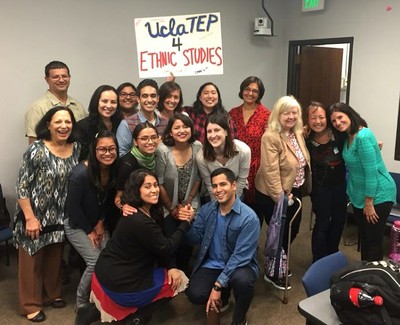 In the fall of 2015 the UCLA Teacher Education Program admitted 15 students to an Ethnic Studies Pilot. These students, English/Language Arts and Social Studies candidates, have enrolled in additional or enhanced coursework to prepare them to teach Ethnic Studies in K-12 schools. They were asked to reflect on their first year of learning.

My journey towards becoming an Ethnic Studies teacher began eight years ago when I took my first Ethnic Studies class in high school. After initially learning about the history of oppression and colonization of the Filipino/a people, I discovered something within myself that yearned for more. I went on to study Creative Writing and a minor in Race and Resistance Studies at San Francisco State University, the first and only school in the nation to have a College of Ethnic Studies. There I took more classes to explore my identity as a mixed Japanese-Filipina-American, and sought classes in Africana Studies, Asian-American Studies, Raza Studies (now called Latinx Studies), and Muslim-American Studies in order to learn more about the struggles of other communities of color.

My junior year at SFSU, I became involved in an organization called Pin@y Educational Partnerships (PEP), which trained undergraduate and graduate students to teach Filipina/o American History and Ethnic Studies to students in San Francisco’s Excelsior District from kindergarten to college. For four years, I dedicated my life to PEP, teaching high schoolers at Balboa High School. Through PEP, I was able to understand the relationship between theory and practice. It is important to know history and understand how oppression continues to affect us; it is equally as important to take action against oppressive forces in order to transform our situations. With the help of PEP, I realized my path as an Ethnic Studies teacher, and applied to UCLA’s Teacher Education Program with its focus on social justice.

It has been about a year since I received my letter of acceptance from UCLA. I remember calling my mom after getting the news, looking for a place to live, moving from the Bay Area to L.A., attending Orientation, and the various ups and downs that come with the TEP journey. It was not an easy transition. Coming from activist/organizer roots, I experienced a lot of shock entering a research institution. The prestige of studying at UCLA wore off within the first quarter as I was struggling to fit my prior identity into a new space. The transition was rough. In the beginning, when being in the Ethnic Studies cohort merely meant taking two extra classes in the program, I felt stagnant and skeptical. How could two classes my first year in TEP really prepare me to be an Ethnic Studies educator? Without an Ethnic Studies class to observe and, later, student teach in, how was I putting Ethnic Studies theory into practice? These issues propelled me into action. In true Ethnic Studies fashion, I needed to transform my situation in order to fulfill my needs as a pre-service Ethnic Studies teacher and a woman of color.

As committed to social justice as this program is, I still get the underlying feeling that my experiences and growth as a woman of color are marginalized compared to the experiences and needs of white teachers. This has less to do with the intentions of my advisor and instructors and much more to do with the history of teacher education and the initial purpose of this institution. Hilary Swank in Freedom Writers and Michelle Pfeiffer in Dangerous Minds are stellar examples of the white savior teacher ideology this program combats. Especially in urban schools, there is a need for teachers to realize that they are not saving anyone; rather they are exposing students to tools they can use to transform the odds set against them. While this trope definitely still applies to teachers of color who have not checked their privilege and positionality, this is not the only thing we should be focusing on. 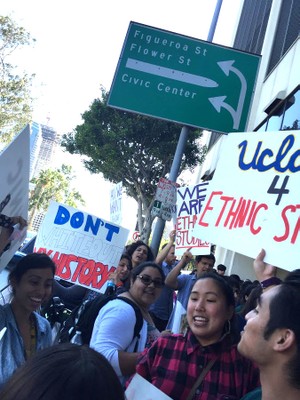 Ethnic Studies reframed my understanding of education. Though I valued the college-driven curriculum in my K-12 education, I always felt a sense of detachment from the content I was learning. I never found myself mirrored in the stories. I never learned to think critically about the “standard” knowledge. I never imagined that I could be a source of hope for my community. I only knew that in order to be successful, I had to learn what was presented, even if it meant forgetting my own identity. It wasn’t until my last years as an undergraduate student at UCLA that I discovered Ethnic Studies. I learned about the struggles and accomplishments of Chican@s and about the systems of power that have marginalized and oppressed People of Color. I absorbed such precious knowledge with great excitement, yet also frustration. How could I have gone through so many years of education without Ethnic Studies? Now, as I begin my teaching career, I remind myself daily of how I am implementing Ethnic Studies within my content area of English Language Arts. Through the continuous support of the Ethnic Studies cohort, I have grown into the educator I want to be: one driven to empower and humanize the schooling experiences of both students and myself.

Teaching Ethnic Studies within an English Language Arts classroom has demanded great experimentation and research. The units I’ve developed with my teaching partner have focused on subverting the dominant narratives in literature and challenging students to ask themselves as they analyze various texts critical questions, such as, “Who has power? Why? How do the texts critique or reproduce ideologies of racism, sexism, ageism, and other forms of oppression? How does this affect me? What role do I play in challenging these ideologies?” Engaging students in such dialogue has resulted in insightful realizations for both students and myself. I am always stunned by the experiences that students share in class and see that through their sharing, we transform the classroom into a humanizing space. Moreover, it is always exciting to watch students develop the language to critique not only the literature, but also real world issues affecting their lives and communities.

I was interested in joining the Ethnic Studies Pilot Program because of my dedication, commitment, and passion to social justice. I have many memories of learning very racist and sexist ideologies when I was in high school that I accepted as fact until my later college years. During my undergraduate career, I picked up a second major in Gender Studies and became the Editor-in-Chief of UCLA’s feminist newsmagazine. During this time, I immersed myself in the feminist community to decolonize my mind and to unlearn the very patriarchal schooling that I received.

While I am so thankful for the privilege and opportunity to take Gender and Ethnic Studies courses in college, I still feel disheartened that I grew up without this knowledge. I am the first in my family to attend college and a lot of folks do not get the opportunity to seek higher education, which is why it is so problematic that I was not exposed to Gender and Ethnic Studies until I attended a university. It should not be a privilege to learn about your race, gender, sexuality, or ability, it should be a right. This is what inspired me to become a teacher. I believe that education is a means for social change, and that starts with ethnic, gender, and sexuality studies, not just in secondary school, but in primary school as well.

I was very apprehensive about applying to the Ethnic Studies Pilot, because I strongly believed, and still do believe, that it should be teachers of color that are teaching about their own communities. However, while I still recognize and believe in the importance of recognizing my positionality and immense privilege as a white person, I wanted to be a better educator and a better advocate for my students and my community. The Ethnic Studies cohort is a space where I not only feel a deep sense of belonging with other like-minded folks, but a unique place in academia where marginalized voices are not only represented, but are amplified. This community has allowed me to be a better educator, a better activist, and overall a better human being. I hope to create the inclusive, intersectional, and empowering space the Ethnic Studies cohort gave me in my own classroom. 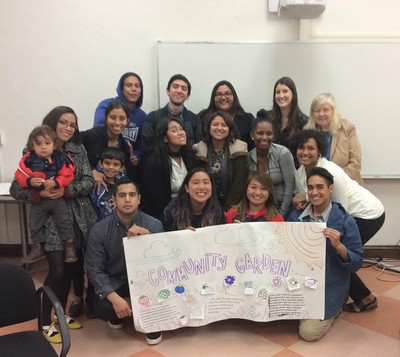 I have been very critical about Ethnic Studies because I felt that it was the very thing that drowned out voices of marginalized people of color. Let’s use my experience as an anecdote; imagine living in a community in which ninety-percent of the population is Latino. Of that ninety percent, only eight percent is Salvadoran; essentially, there were not many people of my ethnic background. I grew up celebrating Mexican culture my entire K-12 experience. I remember in the first grade I was excited that my teacher spoke Spanish and identified as Mexican. I came home only to be made fun of by my siblings and they started calling me Mexican, this was when I first realized that I was not like other brown kids on the yard.

Let’s fast-forward to my time at the University of California, Davis. This was my first time being away from my home community and my first time around other people of color. I made friends with Nigerians, Ethiopians, Koreans, Chinese, Filipinos, and Salvadorans; I never met people from these ethnic backgrounds. I started to truly feel pride in being Salvadoran, because for a long time I didn’t think being something other than Mexican or White was validated. Still bitter, I intentionally avoided Chicano/a Studies courses as much as I could, because the term Chicano to me signaled Mexican History. I was certain these classes would only teach the Mexican experience and neglect the history of other Latino groups. It was fate that my major required some Chicano Studies courses, and it was then that I realized that my misconceptions would not come true. Taking courses such as “Ethnicity in American Communities,” “Race Relations,” and “U.S. and Mexican Border Relations,” made me realize that my history mattered. I wish that I had taken these classes in my K-12 experience, so I would not feel like a Salvadoran outcast.

Now here I am a part of the Ethnic Studies Pilot Program and realizing more than ever the importance of Ethnic Studies in K-12 schools. Students deserve to be validated in their histories and experiences; too often young people are disenfranchised and we expect them to learn what we give them. We need to create positive learning environments for our students by validating who they are as unique individuals. Ethnic Studies provides a separate space for those who have been historically and systematically disenfranchised. It is a space to grapple with the injustices of our hegemonic society, it teaches resiliency and agency, it teaches critical analytical skills, and it inspires positive social change. Ethnic Studies teaches the intersectionality of all our identities and it is inclusive of all people’s lived experiences. I hope that wherever I teach that I will develop that space for students so they never feel the way I did when I was in K-12.