It is time to reclaim the democratic purposes of public education in California. The recent national election signals heightened interest in politics as well as deep fissures in our civic community. Further, the current moment—a global pandemic, the urgent need to address racial injustice, and wildfires up and down the West coast—highlights complex problems that demand public engagement and action. There is a clear need to prepare youth for thoughtful and powerful engagement with societal issues. Promoting civic learning in a period of increased political polarization and misinformation will be challenging for public schools. But ignoring these forces is not an option for a democratic society. Students must learn to investigate pressing issues of concern, seek out trustworthy information, engage productively across differences, and take action to help respond to problems.

Our study of civic learning in California school districts assesses the degree to which districts are focused on and devoting resources to these civic priorities. During the first half of 2020 we surveyed and interviewed district officials, examined Local Control Accountability Plans (LCAPs), and analyzed a representative sample of mission statements from district websites. The following key findings emerge from our study.

KEY FINDING #3: There is little staffing and infrastructure that supports this civic agenda.

MOBILIZING CIVIC LEARNING ASSETS IN CALIFORNIA FOR CHANGE. Whereas districts’ public-facing documents demonstrate a lack of attention to and support for civic learning, there are reasons to be hopeful about the future of civic education in California. There are a range of assets that can be mobilized to expand and deepen civic education in California, such as youth themselves, families and community members, community-based youth organizations, leading school districts, intermediaries, and state coalitions.

A NEW OPPORTUNITY FOR CALIFORNIA: THE STATE SEAL OF CIVIC ENGAGEMENT. The State Seal of Civic Engagement (Seal) provides a new opportunity to expand, galvanize attention, and support civic education in California. Ideally, districts, youth organizations, labor unions, parent groups, community partners, the business community, and more will embrace the Seal as a goal for all California students and commit to supporting high-quality civic learning across the state.

THE CURRENT MOMENT CREATES AN OBLIGATION TO ACT. The societal problems we face create an urgent need to prepare young people for thoughtful and informed civic action. Educators can respond by gaining input from youth and community members and by forging new initiatives in civics and social science, by partnering with organizations in California’s communities, and by integrating substantial attention to these issues into other aspects of the curriculum such as science education, English and Language Arts, ethnic studies, and social and emotional learning.

RECOMMENDATIONS FOR MOVING FORWARD. A systemic commitment to and investment in civic learning is needed in order to reclaim the democratic purpose of public education in California, ensure that all students have access to high-quality civic learning, and open up pathways for a broad cross-section of students to attain the Seal. Clearly, advancing this agenda is a multi-year project and one that will need support from multiple sectors. And public action is needed at the state and local level. We present four recommendations for state-level action.

New state policies must be paired with energetic action at the local level that ensures civic education shapes the experiences of all California students. It can’t simply occur in a few innovative schools or classrooms. One important step forward for districts will be to adopt the Seal. But to realize the promise of the Seal and advance civic learning for all students, districts need a comprehensive reform strategy. We recommend four steps (or phases) for local-level action.

2020 has been an incredibly difficult year for all Californians. Public schools must support youth as they navigate these precarious times. State actors, county leaders, school districts, educators, youth, families, and communities all have an important role to play in promoting high-quality civic education. Such work is essential if we want California youth to develop the knowledge, skills, and capacities needed to participate fully and effectively in democracy. Our collective future depends upon it. 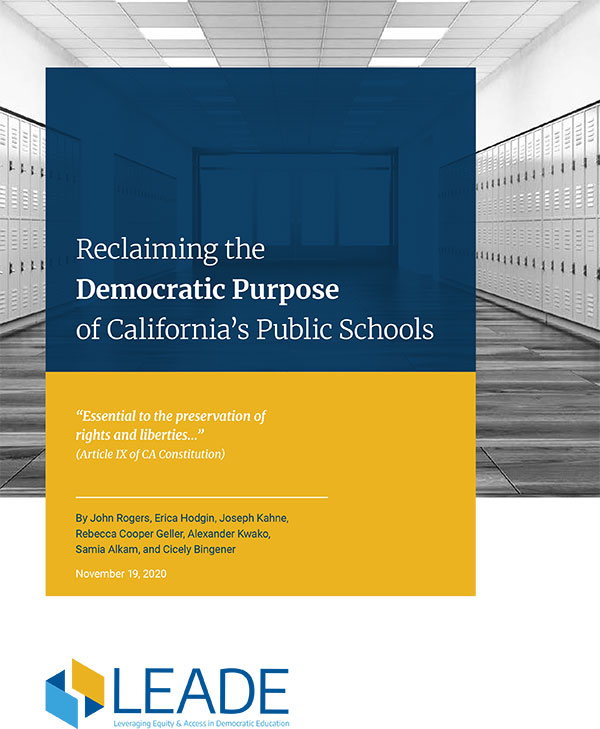