In this week’s Just Talk, the Kharij Collective responds to John Rogers’ questions about how educators should understand, teach about, and resist the “Muslim Ban.” The Kharij Collective is Arshad I. Ali, Assistant Professor of Educational Research at George Washington University; Maryam Kashani, Assistant Professor of Gender and Women’s Studies and Asian American Studies at the University of Illinois; and Shirin Vossoughi, Assistant Professor of Learning Sciences at Northwestern University. They work individually and collectively in the study and development of educational settings for youth from Muslim, migrant, immigrant, and diasporic backgrounds, with particular emphases on issues of race, gender, and social justice.

Professors Ali, Vossoughi, and Kahani invite readers to sign up for a virtual “National Teach-In on the Presidential Executive Order Banning Immigrants” which will be held on February 8. The teach-in is free and open to all interested parties. It should be of particular interest to educators and students in high schools, colleges, and universities.

Links to lesson plans and other resources on the “Muslim Ban” and refugee crisis are included at the end of the Q and A. Special thanks to Ashley Ison and Gulu Saiyed for their work in curating this resource guide for educators.

John Rogers: How has the “Muslim Ban” impacted Muslim children and youth in the United States?

Kharij Collective: Entire families and social structures are being upended. This means that how people are relating with each other and within institutional spaces is fundamentally altered. From everyday experiences of subtle and overt racism to feeling the stress and anxieties of one’s parents, young Muslims have been and fear being physically attacked, separated from one’s family members, or being deported. Prior to the “Muslim Ban,” Muslim communities already felt targeted, whether by surveillance and counter-extremism programs that disrupted networks of trust or the vitriolic language that emerged in the 2016 election. Those of us who work with children and families from diverse immigrant Muslim communities, heard stories of children fearing deportation. Trump appeared regularly in nightmares. The threats of violence from neighbors were not the imaginings of overprotective parents. Numerous mosques were vandalized. The Southern Poverty Law Center stated that nearly 1000 hate crimes were reported in the ten days after the election. This number does not include the vast majority of hate crimes that go unreported.

During the 2016 election “season” and in the months following, Muslim adults, youth and children have been regularly harassed in their communities and in their schools. Many Muslim students have experienced bullying in school, including girls and young women having their headscarves ripped from their bodies. In this context, many parents know that their attempts to comfort their children have more to do with shielding them from the truth than convincing them that their fears are unfounded.

With the Executive Order that bans Muslims from Iran, Iraq, Libya, Somalia, Sudan, Syria and Yemen we are seeing families split apart. We have heard people say “this is not a Muslim ban.” This might be the language being used today, but if we just go back a few months (and even a few days)–Trump promoted a “Muslim ban” as a central promise of his presidential campaign. We have even seen Rudy Giuliani state on national television that Trump asked him for guidance on how to legally ban Muslims from entry into the US. Beyond this particular Executive Order, Muslim communities specifically, and many vulnerable communities are asking, “what’s next?”

Although many liberals have expressed horror at the possibility of a national registry of Muslims, this already happened. The National Security Entry-Exit Registration System (NSEERS) or INS Special Registration was enacted by the Bush administration in 2001, and kept in place by the Obama administration until 2011. The horror that many liberals feel in the Trump election must be contextualized as a continuation of the policies of violence against communities of color in the US. Difficult times are not just on the horizon; they have always been here. Muslim communities have been treated as “dangerous” communities throughout their history in the US.

From the days of slavery when an estimated fifteen to thirty percent of African slaves were Muslim through to the first half of the twentieth century, Islam and Muslim was elementally tied to Blackness–the Nation of Islam, Malcolm X, Muhammad Ali and a Black radical tradition. Anti-Muslim racism and discrimination is not about Islam, theology, or devotional practices. It is about a racialized religious discourse marking particular bodies as “Other” and “foreign,” as problems. Nobody asks people what they believe when they engage in hate crimes against Muslims–no one is asking people if they engage in prayer, fasting or any Islamic devotional rites–they are looking at the bodies people occupy and the countries they come from and calling them Muslim–this is why Sikhs, non-Muslim Arabs and South Asians, and many others are often victims of anti-Muslim racism and discrimination. This is why we need to move away from the idea of Islamophobia, as this is not a medicalized individual fear of Islam, towards an analysis of Muslim racialization and anti-Muslim racism. Violence, targeting and discrimination against Muslims has little if anything to do with any individual’s spiritual or devotional belief or practice, but rather the interpolations of particular bodies and concomitant assumptions about their “culture” and inherent differences, incommensurabilities, pathologies, and dangers.

How have young people been engaged in resisting the “Muslim Ban?”

We should think about resistance broadly in terms of both the visible forms of protest we have been witnessing–where youth are front and center–as well as the everyday forms of resistance that have been an ongoing part of contemporary Muslim life in the United States. Young Muslims, as well as young people who may be interpolated as Muslim, have been carrying the weight of Islamophobia and anti-Muslim racism for most of their lives. They navigate educational spaces where these narratives are alive and well, and they have developed multiple creative strategies that emerge in everyday discourse, interaction, and forms of cultural production. Older siblings and cousins often serve as mentors for younger family members as they work to make sense of and respond to these policies. Like young people within many communities of color, Muslim youth have also actively created their own spaces and organizations within schools and universities to support one another to learn about their histories, to practice and often re-mix their cultural and linguistic inheritance, to find camaraderie in shared experiences of exclusion, and to use humor, art and music to express the full range of their critiques, identities, and visions.

At the same time, as we have seen in Quebec and Texas, the spaces where people normally go for refuge, support, and to plan ways to respond and care for each other are now (and have been) under threat. It is striking that the very places that administer this ban (airports), are now the places where Muslims feel safe to pray together, with the protection and solidarity of fellow protesters.

We also have to remain cognizant of the limits of resistance and capacities to resist. Maintaining one’s dignity and faith in the face of hateful rhetoric and being handcuffed as a five-year-old, are tall orders and require that parents and educators be equipped to deal with the stress young people and children are under. At the same time, we are seeing children and youth enjoying their first protests and marches, articulating their humanity and moral clarity.

What is the role of K-12 educators in responding to the January 27 Executive Order?

Problems of anti-Muslim racism alongside projections of racial and religious ambiguity create a context within which Muslim and immigrant/SWANA (South West Asian and North African) children and youth are directly experiencing various micro- and macro aggressions, but may be interacting with adults in school settings who do not have a complex understanding of their racial identities and experiences of specific forms of racialization. In some cases, children experience and absorb anti-blackness, as well as anti-Muslim and/or anti-immigrant sentiments. Other children come from non-religious households and are then confused about why they are targeted in particular ways. Critical education with and for educators is thus crucial.

Also, we must unlearn our common assumptions that children, particularly young children, are somehow not aware of what is going on around them and of what is happening to their families and communities. We should assume that they are actively making sense of these narratives and forms of racism from a very young age. Yet all too often it is not until high school or college that youth are provided opportunities (or the space to develop their own organizations) to make sense of and collectively respond to these narratives and to learn about their own histories. Connecting with elementary level teachers and early childhood educators about ways of countering this trend, such as through the use of children’s books as a tool for meaning making and dialogue, is key. The upcoming Bay Area conference on Sanctuary Education as well as organizations like People’s Education Movement provide powerful venues to learn from teachers who are actively engaged in this work.

In our view, forms of professional development that meaningfully equip educators to protect and support young people who are directly affected by these policies require more than “best practices” or “strategies for tolerance.” Too often, we see these practices implemented without the space to cultivate deeper, critical understandings of the histories and political dynamics outlined above—an approach that leaves educators under-equipped to “read” the complexities of classroom interactions in ways that support nuanced and careful responses. Instead, we see the need for sharing models of possible action and specific pedagogical strategies alongside opportunities for teachers themselves to engage in critical social analysis and historicize the current moment in ways that support ongoing pedagogical praxis. In this vein, we see a need for pro-active rather than re-active conversations with students about current events, the communities they impact, and the steps classroom communities can take to build and sustain student-student and student-teacher relationships that are rooted in dignity. In other words, these conversations cannot be understood as only “for” those students who are personally affected. They must be imagined as a central component of a critical and humanizing education.

What makes you hopeful in these perilous times?

Perilous times are not the aberration, but the norm, in the United States. Security has been a privilege, not a right for indigenous, African American, and other communities of color, as well as poor, working, and increasingly, the middle classes of this country. If we don’t find the times perilous, we might ask what histories are we are ignoring; whose suffering is invisible to us?

The hope we have in these times is the hope of we have always had; it is the hope that guided Harriet Tubman, Sojourner Truth, Frederick Douglass, and Ella Baker. It is the hope that we, at the start of a month commemorating Black resistance, are reminded of. It is the hope of renegade communities searching for freedom and oppressed communities searching for air. It is the hope for not just a less violent world, but a just and free world. It is the hope of Grace Lee and James Boggs. We see young and old people participating in their first protests, and we see new possibilities for public dissent, resistance and critical imagination. It is in these moments that we should not only look for, but cultivate creative forms of self-defense and solidarity amongst youth, particularly as they come together as new collectivities and embrace the power they always had.

This interview represents the collective ideas of of the Kharij Collective.

Links to lesson plans and resources: 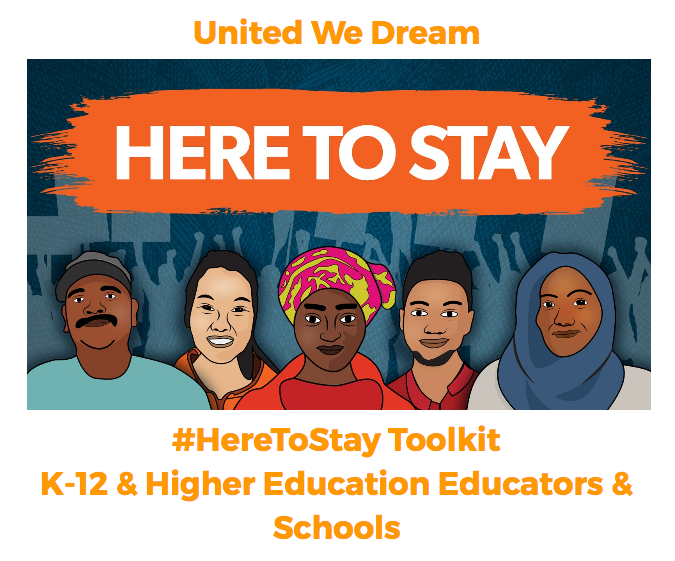 Previous Post
A broader and bolder vision for strengthening public education in the age of Trump: Pedro Noguera
Next Post
The Struggle for Educational Justice in the Age of Trump